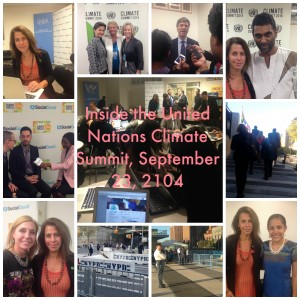 I was invited by the UN Foundation to report on the September 23rd, UN Secretary General’s Climate Summit, from inside the United Nations…I was honored, excited, but also more then a little apprehensive…

Coming off a “high” from marching 2 days before through the streets of New York, defiantly and with purpose surrounded by my children, husband, old friends and many new friends – over 400000 give or take a few – I was filled with a sense of hope and renewed possibilities. We were demanded climate action now. We demonstrated that we are more then ready, and expected our leaders in industry, business, and all levels of elected office, to begin decisively using their powers to take action as well. Filling and overflowing the wide avenues of New York City, it felt like we could no longer be ignored. However, because of my past experience as a delegate at the United Nations, I knew that I shouldn’t “get my hopes up too high.” This Summit, with more then 100 heads of state and government, was certainly the most prominent UN meeting I had attended in many, many years, and the first gathering of world leaders to discuss climate change in 5 years. The timing and the urgency of the crisis we faced seemed to present crystal clear opportunities for real change to be announced and put in motion.

In another “life,” before kids and then again when they were still very young, I worked at the UN. I walked the halls of the United Nations headquarters with impunity and traveled the world to participate in UN meetings, reporting on and negotiating with senior diplomats and change makers. When I left after 13 years, I “shut that door” both for personal reasons, and professionally, as I had become very jaded by all the “talk” and by what seemed to me very little real action….I have been back at the UN numerous times since, and I do recognize that there is a place and a need for talk; actions regularly do come into play, and the UN does have a critically important role, for many, many reasons. The scale and the speed of the actions required at this time however, if we hope to create a stable and sustainable future for our children, remain and are daunting.

The euphoria of the New York Climate March and the recognition that we were not alone in the overwhelming desire to fight for our future, made many realize how powerful we really are and can be. The people of the world are coming together, and have grown tired of listening..and tired of talk. Clearly it seemed, the time is at hand for world leaders to show us that: “actions do speak louder then words…” I knew from past experience however, that calling a meeting of heads of state, didn’t mean that they would actually be sitting down at a table and talking – although a new mode of operating to make this happen is long overdue – rather there would be a lot of speeches, and a lot of talk..and that this is just reality and the “nature of the beast.” UN Secretary-General Ban Ki-Moon called this Summit to create momentum for ongoing negotiations on a draft global agreement that will be presented at a UN meeting in Peru this December. The Summit was also convened as an added push for concrete commitments, with specific time bound actions, to be announced in Paris in 2015. Yes, it does all take some time, but scientists are telling us, and mother nature is showing us, that we don’t have much “wiggle room” nor much more time to waste.

Even though I knew this going in, I wanted to believe that somehow, after what these leaders witnessed on September 21st, many of them would rip up their prepared speeches and announce firm, time bound commitments at this Summit. My hope was that these commitments would include: carbon pricing; agreeing to remove all fossil fuel subsidies; and specific, time bound plans that would move us to a carbon neutral, renewable energy future and now. There would be agreement and resolve to make sure that all remaining fossil fuels would stay in the ground, beginning immediately and that all companies would be held liable and accountable for the damages which they are responsible for creating to our health, welfare, economy and security. I hoped our world leaders would stand up and take responsibility for our actions and that together, we would clearly and decisively change direction, away from the crash course with our natural world that we now traveling on.

While this didn’t quite transpire, I didn’t leave disillusioned. Many world leaders said they had heard, seen and understood why we took to the streets not only in New York City but around the world to demand climate action. They took ownership of their actions, and said serious commitments were forthcoming in Paris in 2015. In the meantime they did make commitments of over $1 billon to the Green Climate Fund, and a small but growing number of countries joined Secretary General Ban Ki-moon to confirm the need to speed up the switch from fossil fuels to 100% renewable energy. Several other countries pledged to go carbon neutral by 2050.

While the Summit produced positive signals and put some money on the table for climate action and in the name of climate justice, far too many governments came to New York to merely restate what they are already doing.

On a personal note, I meet and got to speak with many inspiring leaders at the United Nations: Dr Gro Harlem Brundtland, former Prime Minister of Norway; Christina Figueres, Executive Secretary of the United Nations Framework Convention on Climate Change (UNFCCC); Kathy Calvin, President of the UN Foundation; Kumi Naidoo, International Executive Director of Greenpeace; Kathy Jetnil-Kijiner, the young mother from the Marshall Islands who opened the UN Climate Summit; Jeffery Sachs, Director of Columbia’s Earth Institute; and Koko Warner, senior Researcher with the UN University, to name only a few. What continues to give me hope is that none of these practitioners and leaders tried to sugarcoat how difficult the road ahead to action will be. They all stated that world leaders have recognized and no longer debate the overwhelming challenges we face from our changing climate, and that our penultimate responsibility is clear. But at the same time, they held on to and firmly believe that we should hold onto “climate hope.” Each clearly stated that a stable future for us and our children is possible, but that it will require urgent work by us all…and particularly by our world leaders who we are calling on to do a lot of the serious “heavy lifting!”

The leaders I spoke to and heard from all felt that our world leaders have broadly acknowledged the shared responsibility we all bear for the precipice we find ourselves on and the need to work together to move us away from this cliff. I too, remain hopeful; because we must. Yes, there were a lot of speeches, and yes, promises were made, without clear indications of when and how they would be met. But we, the people, have helped generate the momentum and the power to move forward and we must continue the pressure and hold our world leaders feet to the fire. We must demand and we must expect real, concrete, time bound commitments in the lead up to and at the Paris conference. Our children our watching and their future and their now depends on what we do in the near future. As President Obama stated at the Summit: “We are the first generation to feel the impact of climate change and the last generation that can do something about it.” It is our responsibility and our duty to: “tell the truth, to show that actions do speak louder then words, and to no longer allow fear to paralyze us!

One of my favorite moments of the Summit was watching Kathy Jetnil-Kijiner, passionately and decisively address our world leaders through a promise she deliver to her 7 month old daughter, Matafele Peinem, who was with her in the General Assembly Hall. Kathy was calm but incredibly forceful when she said that we all “deserve to do more than just survive, we deserve to thrive.” When I had the opportunity later in the day to interview her, I was touched by how kind, gracious and thoughtful she is. Kathy made it all seem simple. Because at the end of the day, would we not all – world leaders included – do whatever it takes to ensure that our children will not only survive, but thrive? So, when you talk about this past week’s momentous events with the kids in your life, take a moment as well and invite them to join you and listen to Kathy’s message to her daughter and our world leaders..You will be inspired and fortified….

5 Responses to Inside the United Nations – Climate Summit Hopes