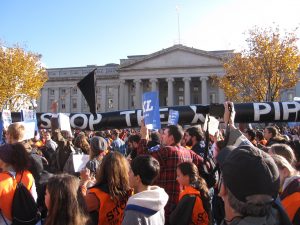 Looking back five years, 2011 seemed to be a time of new understanding as the role, place and impact of human beings on our planet earth was re-examined. In the United States a sense of optimism was ignited, building hope and growing the climate movement with the successful and impactful No Keystone XL protests. National Geographic ran a feature story entitled: “Anthropocene: Enter the Age of Man” and a few months later the world surpassed an incredible milestone, 7 billion people.

Five years ago ClimateMama published one of our most widely read posts: “Top 10 Climate Change Quotes from Inspiring Women.” As world leaders gather in Marrakech, Morocco with the intent of showing us how they will “walk the walk” on climate change policy and actions, we thought it would be illuminating to reach out to some of these same inspiring women, and see if and how their thoughts on the climate crisis have changed and evolved.

We are thrilled to share with you the optimism, hope and urgency of 8 incredible women, ClimateMama superstars, who are taking action and moving forward on climate solutions – leading, not following. Be sure to read our 2011 post so you can compare their thoughts and statements.

We begin with the same quote we started with 5 years ago, with a quote by one of our heroes and one of the founders of the modern day environmental movement, Rachel Carson. This Climate Mama’s words remain hauntingly relevant and urgently poignant, 54 years after they were first uttered:

“We stand now where two roads diverge. But unlike the roads in Robert Frost’s familiar poem, they are not equally fair. The road we have long been traveling is deceptively easy; a smooth superhighway on which we progress with great speed, but at its end lays disaster. The other fork of the road — the one less traveled by — offers our last, our only chance to reach a destination that assures the preservation of the earth.”

“Grumbling about injustices, wrongs and frustrations doesn’t make anything just or better – however, sharing matters! Paying mindful attention and converting outrage into meaningful action in order to bring about positive change really works. Do something each day to make things better for yourself and for others, because we are in fact, consciously or not, making a difference with every action, and every choice we make – one way or another. I live and work by this African Proverb – If you think you’re too small to make a difference, try sleeping in a room with a mosquito. It is incumbent upon each of us – as individuals – to share more, to involve more people, and to leave a healthier world for our children.”

“If the next four years are spent rolling back whatever progress has been made on emissions, then almost certainly the temperature targets that world leaders set last year in Paris will be breached. In fact, even if the next four years are spent making more progress, it’s likely that the targets will be breached. In the case of climate change, to borrow from Dr. King once again, tomorrow really is today.”

“I am privileged to have the opportunity to work with youth and teachers, witnessing regularly the innovative thinking and collective will needed to build more sustainable and just communities. We need full engagement, commitment and follow through on climate action on regional, national and international levels. Creating space for youth to authentically engage in this process will serve us all well.”

“Humanity is currently enacting a narrative that nature is ours to abuse and exploit and pollute as we see fit, forgetting that we are a part of it. We are part of the web of life, and when we harm one part of that web, we harm ourselves. We urgently need a new narrative, where instead of hubris we have humility. Instead of rapacious destruction we have respect and stewardship. Instead of disconnection, we have deep connection – to nature, to each other, to ourselves, and to our future.”

“There is no more powerful voice than that of a mother, father, caretaker, nurturer. We, as stewards of this planet, need to engage even more deeply to confront climate change and environmental injustice. We are the adults, the leaders — and must show our children that we are fighting in earnest for their future, and for the collective future of humankind.”

“Since I realized that global warming posed a threat to my children’s — all children’s’ — health and well-being, one of my most rewarding discoveries has been that our voices and votes really matter to our elected officials. I’d thought that we just needed to make lifestyle changes, like recycling. However, I learned that the scale and urgency of the climate crisis is so great that the only way to effectively tackle the problem is to change our polices. Our elected officials make those policies. Talking to our elected officials is an act of parental responsibility. Voting is an act of love.”

Interesting fact. While researching our 2011 blog post and googling “famous quotes,” the vast majority of quotes found on climate change, the environment, Earth Day and global warming, were from men. This fact remains true in 2016. We need the voices of both women and men on climate change. Everyday, we meet incredible and inspiring women, mothers, grandmothers and sisters who embody our ClimateMama mantra: “Tell the truth, actions speak louder then words, and don’t be afraid.” Along with the voices of our fathers, brothers, sons and grandfathers, we are honored to help level the playing field as we raise up the voices of our Climate Mama’s too. 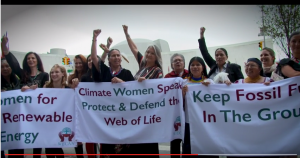 Our partners at Women’s Earth and Climate Action Network (WECAN) regularly feature and show case women’s voices and climate actions from around the world. WECAN is taking many of these often unheard voices to the United Nations Framework Convention on Climate Change (UNFCCC) – COP22 Conference in Marrakech, Morocco. The 2016 “Women Act for Climate Justice” campaign highlights women working together to ensure a sustained civil society presence and pressure that demands that all government’s road maps originate in a climate justice framework, and with respect to human, Indigenous and women’s rights, and gender, social, economic and ecological justice. The campaign is intended to show our collective actions and voices not only in the lead up to COP22, but also far beyond the UNFCCC. It’s not too late to add your: “voice, climate story, struggle, solution or demand.” Add a photo & statement to #WomenAct4ClimateJustice

We are in a life long struggle for our future and that of our children. We hope that the 8 inspiring women we are privileged to highlight in this post, and the many women’s voices rising up the world over on climate justice and climate hope can help to both sustain you and fortify you. We are all in this together, and this knowledge gives us strength every day.