What’s Up in Environmental News This Week: via the Green Divas..

In case you missed it…We are thrilled to bring you some environmental news highlights from the week of July 21st, curated by our friends and colleagues at The Green Diva Radio Show. 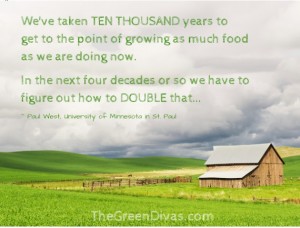 The world’s existing cropland could feed at least 3 billion extra people if it were used more efficiently, a new study has found, showing that the large increases in population expected in the next three decades need not result in widespread hunger.

More than half of the fertiliser currently poured on to crops in many countries is wasted, according to the study. About 60 percent of the nitrogen applied to crops worldwide is not needed, as well as about half of the phosphorus, an element whose readily available sources are dwindling.

Cutting waste even by modest amounts would also feed millions, the authors found: between one-third and a half of the viable crops and food produced from them around the world are wasted, in the developing world usually because of a lack of infrastructure such as refrigerated transport, and in the rich world because of wasteful habits. Read more…

A wildfire that has burned nearly 400 square miles in North-Central Washington was only about half contained as of July 24th, and Obama minced no words Wednesday when describing its cause.

“This June represents a significant milestone for the world’s oceans. Not only was it the hottest June for oceans since record keeping began in 1880, but it was the most anomalously warm ocean temperature for any month. That means temperatures were more freakishly above average this past June than at any other time in the period of record. The previous record was a four-way tie with May 2014 being the most recent month.”

This June’s temperature record also represents a global mark for the warmest the oceans have ever been. The record heat happened to hit in June, when oceans are at their warmest, giving temperatures a further boost. Read more…

PS If you find a WTF or encouraging news story you’d like to hear The Green Diva’s talk about, please email lynn @ thegreendivas.com!

Listen to the show here: