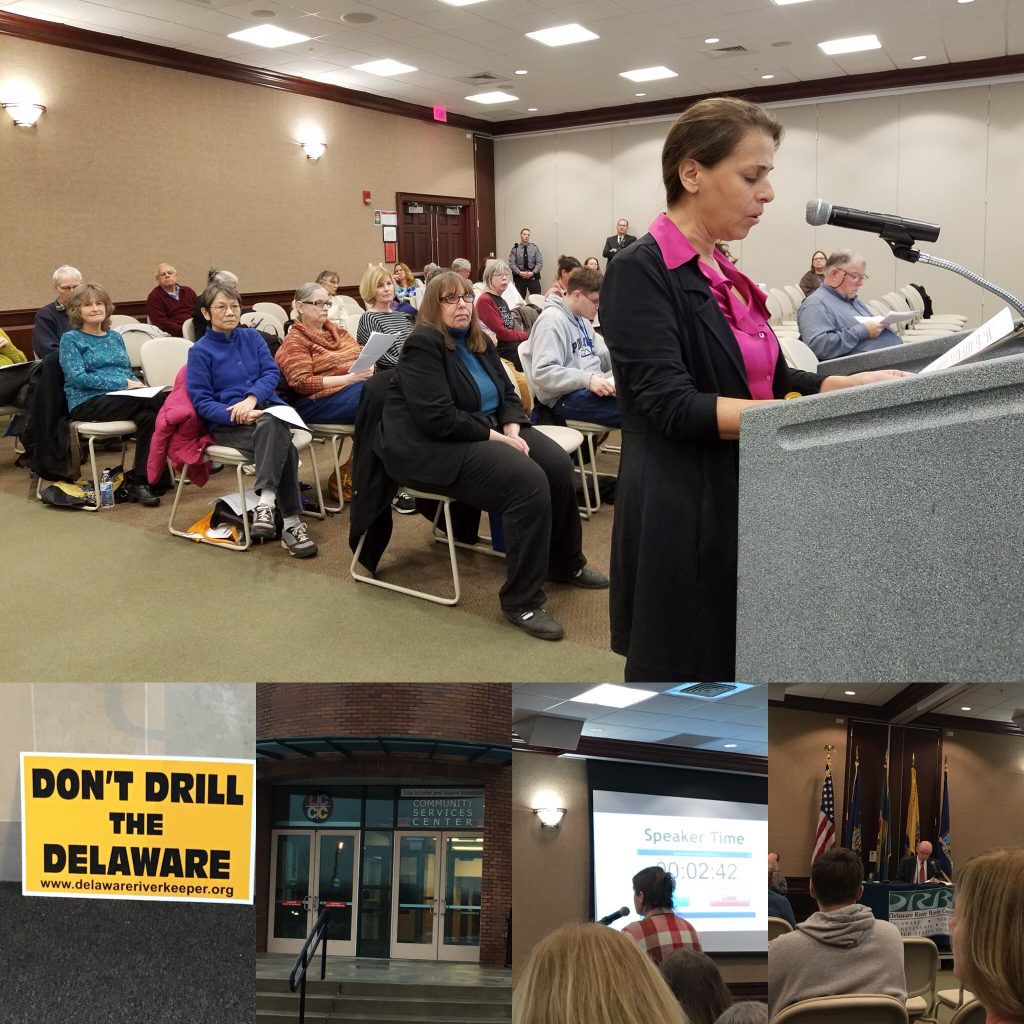 Could a ban on fracking drilling be enough to protect the land, flora fauna, people and WATER of the Delaware River Basin? Would water withdrawals from the Delaware to enable fracking in other regions, including as well the storage, processing and discharge of frack waste in the region – put the land, flora, fauna, people and WATER at risk, even if a drilling  ban is in place? This possibility seems incongruous at the very least and in reality –  completely incompatible!

According to the Delaware River Basin Commission website: “A breakthrough in water resources management occurred in 1961 when President Kennedy and the governors of Delaware, New Jersey, Pennsylvania, and New York for the first time signed concurrent compact legislation into law creating a regional body with the force of law to oversee a unified approach to managing a river system without regard to political boundaries.”

What an amazing concept! Although as with any governing body, it does have flaws – non the less the Commission has been effectively working to protect the basin for more then 50 years;  the concept is being emulated and replicated around the world.  Currently, the Commission has an opportunity to show the world what “Water Protectors” really look like.  From where we sit, being a water protector must mean supporting a complete fracking BAN in the Basin. This trumps the half measures that are being proposed  by some.

It is worthwhile and important to note, that while the Commission is represented by 4 state Governors and the federal government –  hearings on the Draft Fracking regulations were ONLY held in Pennsylvania. New York, New Jersey and Delaware residents had to travel to PA to be heard.  The Basin watershed provides water to more than 15 million people in all 4 states. We too, should and must have a voice as these critical regulations are finalized. 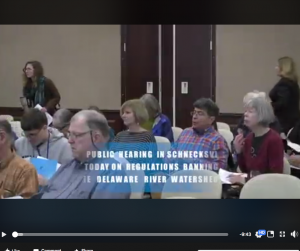 Harriet’s full statement is included below. Click on the public hearing photo to listen to some of the testimony from the February 22nd hearing.

The Commission is taking comments through March 30th. The Delaware River Keeper Network has made it very easy for you to comment on the record and learn more about what is at stake.

Sign up for Watershed Wednesday’s weekly actions. Join us as well and Sign on to a petition to protect the Delaware and call for a permanent fracking BAN.

Send in your comments directly:

Hearing #6: March 6, 2018: 1:30 p.m. to 3:30 p.m.; This will be a moderated public hearing by telephone. Members of the public are encouraged to listen by calling 1-866-831-8713 and asking the operator to connect them to the DRBC call. Those wishing to address the commission at this hearing can register for an opportunity to speak at http://bit.ly/2pdqxQ9.

Greetings, I have travelled here today from northern New Jersey and welcome the opportunity to address each of you.

I am speak as a representative of ClimateMama, a national organization with members from all of the Basin States and in my capacity as the New York City Chair of the Climate Reality Project. I am also an adjunct professor at Ramapo College of New Jersey where I teach a senior level course on Global Climate Change Policy.

I know you have heard many thoughtful arguments already I would like to focus my remarks on climate impacts that threaten the Basin. The realities that climate change already brings to bear on the region must be considered, as must the future climate change impacts – these, as best we can.

I am not sure how closely you been following the arrival of “Day Zero” in Capetown South Africa.[2] Cape Town is a sophisticated city with sustainability programs that serve as models around the world. Yet, as early as July 9th of this year, the taps for nearly 1 million people will be turned off. The drought that has created this near “Mad Max” scenario came seemingly out of no where, in the last 3 years.

Arriving at a water budget is not an easy task; particularly as we live climate change, yet it is one I know that you as guardians of our Basin, are working to arrive at. With the impacts of climate change ever present, anything that threatens the flora and fauna that rely on the Delaware to survive and the access of more than 15 million people to the clean and reliable waters of the Delaware, must be stopped.

Earlier this week, astonishing scientists, the Arctic recorded temperatures above zero, 45 degrees more than normal, this with no sunlight. This is not an anomaly, it is something that has happened numerous times over the past few years[3]. This occurred as we in the northeast are also baking in an unseasonably warm February for the second year in a row, New York City, DC, Boston and Portland Maine all set new high temperatures this week, while Pittsburgh broke a 127 year heat record – hitting 78 degrees yesterday. These types of extremes are happening with more regularity and frequency all around the world.

This past summer, New York magazine published an article called, The Uninhabitable Earth.[4] It looked at the “worst case scenarios” of unchecked climate change. As policy makers, we often use the middle of the standard deviation when assessing possible scenarios; there are no clear studies that tell us how soon or when climate impacts will be catastrophic. This article called on us to look at the worst case scenario, one and two standard deviations away from the norm. There was push back from all sides, including the climate science community. Yet, should we not use the precautionary principal when considering something as critical as our access to fresh water?

I am sure that some of you, like me are parents, or grandparents, uncles or aunts. Climate change is happening on our watch. It is our job to do what we can so that our children have a chance at a safe, healthy and livable future. The United Nations speaks about common but differentiated responsibilities; or as my kids like to say, those that can go big, must. Please visualize your children and mine as you make this critical and very big decision.

As we have seen, time and again, “unexpected” and “unimaginable” scenarios do occur, we can only control that which we can control. You control what happens next. Anything short of a complete ban on drilling and fracking related activities, including, water related withdrawals and storage of waste water would be a dereliction of your stated vision and of your leadership.