How to Talk to Your Kids About Climate Change 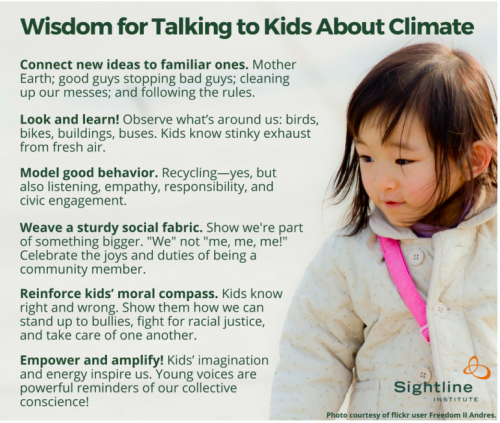 Climate denial has taken on a whole new level of prominence, as powerful and influential politicians cast doubt on the reality of climate science; including the new President of the United States, down the line to the Secretary of State, and to the potential head of the Environmental Protection Agency (with this list growing it seems, almost daily). How we explain to our children what is happening and what is causing our climate to change has always required careful thought and consideration. Sadly now we must also explain how people in positions of trust are not only bending the truth on climate science, but are out and out lying.

At ClimateMama, our mantra is our guiding light: “Tell the truth, actions speaks louder than words, and don’t be afraid.” We draw hope and inspiration regularly from our friends at Sightline. We are pleased to repost, with permission and in it’s entirety, a Sightline series on Talking to Your Kids about Climate Change. The first introductory post in this series, by Climate Mama extraordinarie, Anna Fahey is below.

Wisdom for Talking to Kids About Climate Change
Tips from scientists, activists, and policy experts
By Anna Fahey

When my daughter was four-and-a-half, she asked me point blank about climate change.

You’d think I’d be equipped for this conversation. After all, this is what I do for a living! For over a decade, I have studied the communications literature and issued dozens of talking points memos on climate challenges and solutions.

But her question left me speechless.

She had cracked open a heavily guarded vault of emotions. Everything I know and fear—and compartmentalize—about the planet’s prognosis, our broken systems, and fossil fuel politics was tied in a knot in my throat.

Think about it: dealing with climate change is about things kids already know well. It’s about cleaning up our messes; about the sun, wind, air, water, and our own bodies.

Nobody wants to frighten their kids. (We know even the most reasonable adults are shut down by fear.) But as the stakes grow more stark and the politics get more divisive, it’s more crucial than ever that we bring the full force of our emotions to this fight and that we raise active, community-minded, and environmentally-aware citizens. And, I believe, talking to our kids is one way to focus all our own difficult and powerful feelings in a way that fuels rather than saps our civic and political engagement.

Think about it: dealing with climate change is about things kids already know well. It’s about cleaning up our messes; about the sun, wind, air, water, and our own bodies; it’s about treating all people with respect and dignity, about stopping bullies; about sharing; and also about making rules that keep us safe—and making sure everyone follows the same rules! Young people are naturally curious, observant, and creative—they can get excited about nature, science, and new ideas. 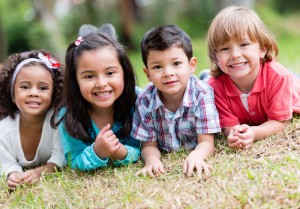 And, most children intuitively know right from wrong. Their built-in moral compass detects and rejects injustice. And most kids aren’t yet jaded and cynical. Even teenagers are ready to question authority, fight established orthodoxy, and embrace innovations. In fact, our kids probably grasp the basics and get on board with solutions better than most grownups!

But the question remains: How do we really talk about it? How do we prepare our kids for the hard conversations and for our own emotions?

Working with ParentMap, we gathered wisdom from respected colleagues, activists, and scientists who are also parents—from Standing Rock, to British Columbia, to Portland, to Puget Sound.

Kandi Mossett is an organizer with Indigenous Environmental Network and a leading water protector at Standing Rock.
Sarah E. Myhre is a climate scientist with the Future of Ice Initiative and the School of Oceanography at the University of Washington.
Rev. Joseph Santos-Lyons is director of the Asian Pacific American Network of Oregon.
Donna Morton is a finance innovator finding ways for people to divest from harm.
Jana Gastellum is climate policy director for Oregon Environmental Council.
Kim Powe is principal at 3E Integrity and a policy expert with a focus on racial justice, equity, and sustainability.
Mara Gross is a communications manager at Climate Solutions in Oregon.
Alex C. Gagnon is a climate scientist at the University of Washington.
Michael Foster is an educator, mental health counselor, and activist.
Eric de Place is policy director at Sightline.
————————————–
ClimateMama will share the thoughts, wisdom and ideas collected by Sightline from the individuals listed above in future posts. Check back soon!

This post is re-posted, in it’s entirety with permission. It was first posted on Sightline on December 9, 2016

Anna Fahey, is the director of strategic communication at Sightline, where she oversees opinion research and distills best practices in messaging into tips and tools. You’ll find her writing posts on how to communicate about tricky issues like climate change and taxes. Anna has an MA in political communication from the University of Washington. Email: anna [at] sightline [dot] org.