Susan, Deborah and Harriet, demanding that Pepsico TELL THE TRUTH and ACT ON IT!

As our Climate Mamas and Papas know, ClimateMama has been a strong supporter and advocate of the Rainforest Action Network (RAN) programs to educate the public and demand accountability and leadership from companies that have Conflict Palm Oil as part of their supply chains. We first came on board with the Snack Food 20 campaign, targeting 20 of the largest snack food companies in the world. The ask, led by RAN, was for these companies to adopt responsible palm oil policies and commit to using only traceable palm oil that is free of deforestation and human rights violations. Many companies did agree, but PepsiCo, which is an industry leader in so many ways, sadly continues to fail to address Conflict Palm Oil in its supply chain. In 2014, we were proud to deliver over 100,000 signatures to PepsiCo headquarters asking them to join us and be part of the solution – ending Conflict Palm Oil. While we were promised actions, instead it seems we have been given lip service and two years later there has been very little change.

So, we are thrilled to be joining with RAN and many other organizations again this spring, to escalate pressure on PepsiCo and we are asking for your help. Grab the kids in your life and show them that when we come together with thousands of people around the world we can and will make a difference. Each of our voices count, and together we are deafening! join us as we stand in solidarity with workers on palm oil plantations – including men, women, and children – who are being exploited to make Conflict Palm Oil for cheap snack food. It’s important to connect the dots. Conflict Palm Oil production contributes in a huge way to climate change, destroys forests and habitat for many species and results in worker exploitation. These circles are all connect. 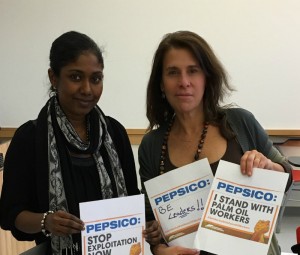 This is a big task, but at this point what we are asking from you is pretty simple: get educated on these facts, educate your friends and family, and join us by taking a picture of you and your family, you and a friend, or just you, and share that photo of on social media with the hash tag, #SolidarityWithPalmOilWorkers.

For the picture, be sure to include a sign addressed to PepsiCo. You can download a premade sign from the RAN website here – as we did in the picture on the left. You can also make your own sign, and get your kids involved in the design. Let’s remind PepsiCo in no uncertain terms that stopping worker exploitation is really important to us. As consumers of PepsiCo products, we are a powerful group. If you aren’t on social media, you can also e-mail the photo to RAN and they will post it for you. You can email it to palmoilaction@ran.org or send it to us and we will forward it for you!

Together we will collectively generate thousands of photos as a beautiful show of people power that culminates on International Workers’ Day/May Day, on May 1, 2016. RAN will deliver the photo petitions to PepsiCo CEO Indra Nooyi at the company’s shareholder meeting in early May to demand an end to labor abuse for cheap snacks made by PepsiCo.

P.S. How does Conflict Palm Oil contribute to climate change you may ask?

In a nutshell, by draining the tropical peatland forests, which, like our oceans, serve as important carbon sinks, we are creating conditions for more CO2 to go into our atmosphere and trap more heat. Fire is used to clear vegetation for oil palm plantations, which also puts a lot of C02 into the air, fires also break out on the drained peatland forests, causing catastrophic problems and adding more CO2 into the atmosphere. Current palm oil agricultural processes and the deforestation that is happening because of these methods are harmful for our world, and for our future.