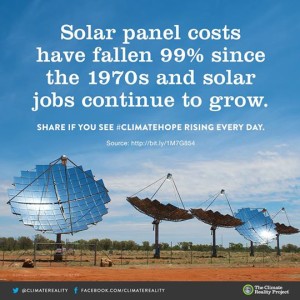 On Earth day (or any day) share these facts with the kids in your life:

• In a 2015 report, Deutsche Bank predicts “Grid parity” (the cost of rooftop solar versus the cost of electricity sourced from the grid) in 80% of the world by 2017 and that rooftop solar PV will reach grid parity in all 50 US states by 2016…even with the collapse of oil prices.

Particularly in developing countries, where national grid systems are not well established – and similar to the experience of many developing countries with cell phones vs land lines – old technology (fossil fuel based energy sources) is being bypassed completely and 21 st century energy is taking hold. Renewable energy is the driving force, with solar energy taking a front seat.

An organization which is helping many developing countries move forward with solar is the Solar Electric Light Fund (SELF). SELF is a Washington D.C. based nonprofit whose mission is to assist the 1.5 billion people living in energy poverty to power up with solar. Alleviating energy poverty not only “turns the lights on” in homes and communities, it also aids and enhances a country’s economic, educational, health care and agricultural development. SELF helps specifically by supporting small solar installations in places with a defined need. For example, after the 2010 earthquake in Haiti, SELF solar installations helped power eight health centers. In Benin, SELF built a solar irrigation system so that families could grow food in a sustainable, empowering way. SELF is currently working on a project to help provide lighting to schools in rural Columbia.

Special thanks to our partners at ClimateStore who first introduced us to SELF. In fact, through April 27th, the ClimateStore has an Earth Week Special whereby they are donating 10% of their Earth WEEK proceeds to SELF.

ClimateMama is proud to be an Ambassador for the ClimateStore, a company that “walks the walk” on sustainability, climate change education, advocacy and solutions. The Climate store helps people reduce their carbon footprints here at home while at the same time it is helping us “connect the dots” to people and communities in developing countries; people who are most impacted by climate change, and who are the least responsible for causing it.

Share the hashtag #10forSolar. Join us in our support of the Climate Store, as we work together to help people better understand how the products we buy and the companies we support have a direct impact on climate change and our ability to create a more sustainable world. Make sure to check in regularly with the ClimateStore; they have done a lot of the hard work and research for us, and have chosen items with careful purpose and intent.