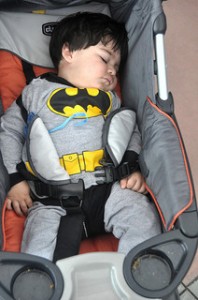 These days, beyond being a time to “let loose,” watch scary movies, and eat and collect candy, Halloween has also been a moment to mark the end of one season and the beginning of the next. In North America we transition at the end of October towards the “holiday season,” building towards Thanksgiving and also, of late, the winter holidays; as retailers try to hurry us towards Christmas! 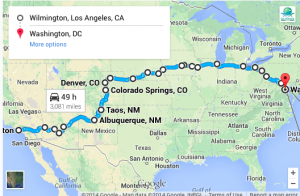 This year, Halloween marks a final “rest day” for our intrepid heroes, the Climate Marchers who left California on March 1st on the Great March for Climate Action, and who will take up their walk one last time on November 1st, as they stride into Washington DC, road weary but triumphant, and still full of energy and passion as they continue ringing the warning bell on climate change and raising the flag for climate hope.

Amongst the thousands of folks cheering them on will be a core group of parents, workers, artists, and grandparents – regular folks who are part of a growing coalition called Beyond Extreme Energy – people fighting for and demanding a sustainable and livable future and now. The coalition will “kick off” a series of ongoing events, with a week of actions in Washington DC to bring attention to the role and power of the Federal Regulatory Energy Commission (FERC) in advancing fossil fuel infrastructure and development and why we ALL should be calling for a reform of this agency which contributes to the growth of greenhouse gas pollution and hinders and counters advancement of climate action hope and plans. Join us!

Hundreds of people are planning to take part in a very full week of climate action in Washington, D.C. November 1-7, focused on FERC, the Federal Energy Regulatory Commission. The week will also draw connections to other very problematic institutions as far as the global warming crisis.

Over 50 organizations have endorsed this week of action, many of them local groups fighting fracking, fracking infrastructure and proposed fracked-gas export terminals. On Friday, November 7th, the last day of the week, dozens of fracktivists from the fracking-ravaged state of Pennsylvania are traveling to DC to anchor that morning’s action at FERC.

The continuing fight against the Cove Point export terminal is a central reason for this week and a major focus of the Beyond Extreme Energy (BXE) demands, which can be found at http://bit.ly/BeyondExtremeEnergy; and in summary demand:

-a withdrawal of permits already granted by FERC at Cove Point, as well as at Myersville, Md., Minisink, NY and Seneca Lake, NY, as well as a stop to the permitting of any more fracked-gas infrastructure;

-that FERC prioritize the rights and health of human beings and all life on Earth over private profit, address climate chaos and adhere to the precautionary principle;

-that FERC commissioners meet with communities affected by already-approved or proposed fossil fuel infrastructure; and,

-that Congress convene an investigation into FERC’s rubber-stamping ways.

The heart of the BXE actions is five days of nonviolent sit-ins at the entrances to FERC every morning of the November 3-7 workweek. Over 100 people have signed up and indicated their willingness to risk arrest, with many others signed up to participate in other ways.

The week will begin on Saturday, November 1st when BXE participants join with the Great March for Climate Action as it walks the final leg of an eight month walk across the country which began in Los Angeles in March. Hundreds of us will walk from Elm Street Park just a few blocks from the Bethesda Metro stop, gathering at 9 and beginning at 9:30 am. The 7 mile walk will end at the White House where there will be a rally. Then that evening, at 7:00 pm at St. Stephens Church, there will be a longer program where marchers reflect upon their heroic experience.

Sunday will be a full day of training, discussion and preparation for the week of action.

In addition to the early morning actions at FERC, there will also be actions each afternoon at other locations.

Monday afternoon will see a demonstration outside the headquarters of the Democratic National Committee calling upon them to get real about the seriousness of the climate crisis. This will be followed by a “flash mob” action at FERC and at Union Station spearheaded by fracktivists coming down from New York City. For the DNC action gather at the Columbus Statue outside of Union Station at 1:30/1:45 for a march to DNC. Look for the “flash mob” group around 4:15 at the same location.

Tuesday afternoon a bus has been reserved to take people to Cove Point for a demonstration in support of local people who continue to fight the plans by Dominion to build a dangerous export terminal. We plan to be in Solomon’s Island on Solomon’s Island Rd. near the long bridge by 2 pm.

On Wednesday afternoon there will be an action at the Justice Department calling for them to intervene to see that justice is done in Ferguson, Mo. and that the national scourge of police brutality, especially against black and brown youth, is seriously addressed. We say: stop disrespecting and abusing the earth and its climate, stop disrespecting and abusing the people. We plan to be at the Justice Department, 950 Pennsylvania Ave. NW, between 9th and 10th Sts., by 2 PM.

On Thursday afternoon we will demonstrate outside the headquarters of National Public Radio, which keeps running pro-fracking ads of the oil and gas industry and just cut back its team of environmental reporters to one! NPR is at 1111 N. Capitol St. NW, near L St.

And on Friday, led by fracktivists from Pennsylvania, we will go the Dept. of Transportation to demonstrate against its policies and practices that are allowing a dramatic expansion of coal, oil and gas shipments, including exports. We should be there around 1:30 pm, and DOT is at 1200 New Jersey Ave. SE, at M St.
There is still time to make plans to participate in this important seven days of climate action. You can find out more and sign up at http://bit.ly/BeyondExtremeEnergy. Let’s build upon the power and spirit of the People’s Climate March and say loudly and clearly that NOW IS THE TIME TO STEP IT UP ON CLIMATE ACTION.

Ted Glick is the National Campaign Manager for the Chesapeake Climate Action Network. Ted has devoted 40 years of his life to the progressive social change movement, he is a community organizer, writer, journalist and author.