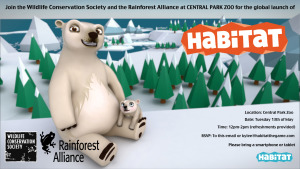 Looking for fun AND learning opportunities for your kids this summer; something for them to do on days when they can’t get outside? Look no further…join us as we check out a New Environmental App, Habitat the Game. Our tour (and featured guest post) comes to you directly from Kylee Ingram, Habitat’s developer!

This game, designed for 7-12 year olds (although when we tried it out, we loved playing it too!) rewards kids for undertaking Real-life Missions to Save their Virtual Endangered Species and Reduce Their Ecological Footprint. Your kids can play the game and then teach YOU what your family can actually do to shrink your family’s carbon footprint. Join us as we hear more from Kylee:

Habitat The Game
by Kylee Ingram 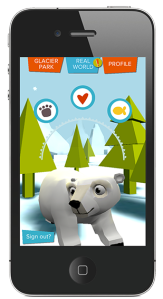 A collaborative project of the Wildlife Conservation Society and the Rainforest Alliance, Habitat the Game was launched in NYC just in time for summer 2014. This free app rewards kids for undertaking environmental actions and exploring the outdoors, on days when they can’t get outside.

“Kids today spend 70 percent less time outdoors than they did two generations ago,” said Courtney White, Director of Education at the Rainforest Alliance. “This app helps get kids outside while educating them about biodiversity and simple steps they can take to reduce their environmental footprint and create a healthier future for the planet.”

Designed to teach seven to 12 year-olds ecologically sustainable habits, Habitat encourages players to adopt an endangered animal, a virtual polar bear, and keep it happy and healthy. Players earn points through games in the app and by completing real-life “missions,” like recycling or checking in at more than 30 parks around the world, including the Wildlife Conservation Society’s Bronx Zoo and Central Park Zoo, as well as national parks and other iconic sites. The virtual pins collected at these sites can also be traded with players around the world.

Habitat’s point system incentivizes players towards a 25% reduction in their carbon, water and land use.

The Habitat team worked with the Integrated Sustainability Analysis team at Sydney University to develop algorithms that measure players’ ecological footprint based on indicators like water consumption and greenhouse gas emissions. In addition to promoting outdoor activities, the point system in the game incentivizes players towards a 25% reduction in their carbon, water and land use and shows their impact through an ecological footprint calculator.

The game developers used kid’s focus groups to identified 51 environmentally friendly real world actions that the kids felt they were in control of. Some of these included turning off the lights, recycling, composting and conserving water. They have included these behaviors in the game and they reward kids every time they undertake these real world actions. The game structure has made the behaviors a core part of the game rather than just simply gamifying the actions i.e the kids can’t play the game unless the participate in the real world. 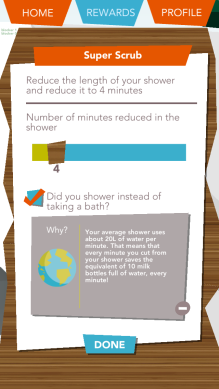 “Our aim was to create a game that was entertaining, but also had crossover into the real world,” said Kylee Ingram, the game’s developer. “Kids who play Habitat will be encouraged to change their real life behaviors.”

The developers have also taken a holistic look at sustainability with this game and they have included well-being.

At at no time in human history have children spent less time outdoors. Children between the ages of 8 and 18 spend an average of 6.5 hours each day engaging with electronic media, but less than 4 minutes a day in unstructured outdoor play. A recent British study found that children at 8 years old can identify more Pokémon characters than they can wildlife species.

A wealth of studies report similar alarming findings. So they decided to try and reward players for heading outdoors. Players rack up points by visiting landmarks such as the locations around Central Park Zoo, national parks and other iconic sites. They collect virtual pins at these sites, which they can trade with other players around the world. There are currently sites in 11 different countries.

They are attempting to bridge that gap between gaming and the real world. So let’s adopt some bears and explore the world!

Habitat the Game is available to download for free on all iOS, Android and tablet devices. Visit www.habitatthegame.com to learn more, or find the app on iTunes and Google Play.

Kylee Ingram is an Australian born digital content producer and socialpreneur. Starting as a documentary maker, Kylee has 15 years of production experience. Today Kylee is focused on exploring the intersection of interactive media with the real world. Her most recent apps Team Tap and Habitat the Game both enjoyed global launches.