My family was lucky. No one was hurt. No fallen trees. No flooded basement, and we had and still have power. We also had plenty of time to prepare for Irene, a massive but slow moving storm. Our bathtub was filled with water, as was every water bottle in our home, and we stocked up on non-perishable staples at our local grocery store; as well we had time to recharged all our batteries for our radios and flashlights, and all our electronics (something that was “crucial” for my two teens!) Many of my New Jersey neighbors were not as lucky as we were this time. Irene has left many of them with water in their homes, with fallen trees and downed power lines, some of whom have been told they will be without power for up to a week. But as we hear more reports of damage faced by many in Irene’s path, it seems that even my neighbors without power are lucky. But many towns and communities up and down the eastern seaboard weren’t so lucky, and next time, who is to say we will have as much warning or the ability to take as many precautions as we could this time.

As we ventured out after the worst of Irene was behind us, our family dog, all 11 pounds of her, carefully carried and then laid a chipmunk at our feet. The chipmunk looked like it had been buried in mud; its fur was matted and dark. While our dog did her best to bring the chipmunk to us to save it, the chipmunk didn’t survive the night; much to the sadness of my children. Fortunately, this was the only loss of life we witnessed firsthand, or heard about in our New Jersey county. I remain convinced however that this hurricane is a harbinger of 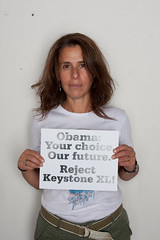 storms we will face in our near and not too distant future; storms that will be faster, stronger, and more intense, perhaps burying more than chipmunks in my yard. This harbinger reinvigorates me and prods me to remain vigilant and to speak out. To make sure that I don’t get side tracked nor let people that I know get caught up and mislead by political shenanigans or big business misrepresentations of the facts that try to perpetuate our use of fossil fuels…laying doubt before us like barely alive chipmunks… muddying the science and clouding the reality of climate change. With over 97% of all climate scientists telling us we humans are causing our planet’s climate to change, it is more than about time we take the scientists and nature’s warnings and messages seriously.

As it relates to hurricanes, the reality of climate change is that in the past 30 years, the amount of water vapor above the oceans has increased by 4% due to warmer air and warmer water. Scientists tell us that with each 1-degree rise in temperature, the water holding capacity above our oceans increases by 7%. Scientists have shown us that the surface temperatures of the oceans are warming. Warmer water cause the air above our oceans to hold more moisture, results in bigger storms. In a recent interview with Alex Bogusky, Al Gore, Former Vice President of the United States, tells us that we are not only “loading the dice” with extreme weather events, we are now changing the odds, as we paint more dots on the dice, and the chances of larger, more intense storms has now become the norm.

We need to stop pussyfooting around and face head on the reality of climate change which is happening now, not something that may happen hundreds of years from now. As the United States heads into a presidential election year, we need to question loudly how did it somehow become fashionable and a “badge of honor” to dismiss what scientists are telling us and deny that climate change is real. Climate Change shouldn’t be a partisan issue. Rather it is and remains a fact that we all need to address now, not only for our children’s future but also for our own.

Join me and RSVP for 24 Hours of Reality, September 14-15th, to hear more about extreme weather and climate change and what we together can do to address our changing climate.

For links to recent articles on Climate Change and Extreme Weather Check Out: One Earth, Grist,The New Yorker, Scientific American.