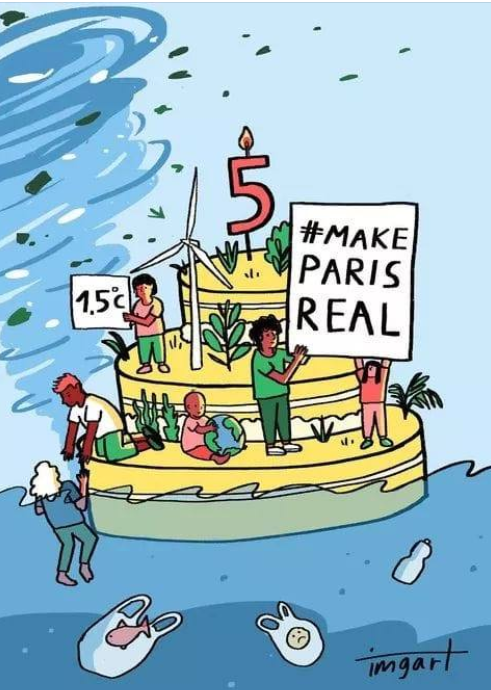 As I explained 5 years ago: The final Paris agreement was carefully worded and crafted, it laid out hopes for what we should do, it apologizes for what we haven’t done, but what it didn’t do, was lay out a clear path on how we will get to where we need to go.

Five years ago I was not in Paris for the United Nations Conference of the Parties,  the UN meeting that  signed off on what now is broadly known as the “Paris Climate Agreement.”  Over the years, I have attended my share of UN Conferences and events around the world. Five years ago, similar to today,  my job was and it remains to report on what is happening, to be in real time with colleagues and friends on the ground as we  share and explain the giant leaps and the small steps, as they impact us as a world community as well as how Climate negotiations and agreements are being received, perceived and acted upon in the United States. Today, while the UN is meeting virtually  on this 5th Anniversary, as an expert witness my job remains to help us tell the story of our climate emergency, to pull back the curtain and share clearly where we are, where we should be, and what is ahead. Our Climate Mama motto continues to guide me: “Tell the Truth, Actions Speak Louder Than Words, Don’t be Afraid.”

For those of us closely involved and following along, the success of the Paris Agreement – for better and for worse –  was not the creation of one unified concrete plan. Rather what was created was an open blueprint that could be adjusted and adapted for each country. The overarching acknowledgement by the world community was that we, as a global community, are now living a collective emergency. Sound familiar? Five years later, we are living with and figuring out how to manage through a global pandemic – it is raw, immediate, real and dangerous. Yes, COVID19 is this and more, but so too is the often silent, sometimes visible and always relentless multi-prong attack from the climate crisis – a global emergency that will continue for the rest of our lives. As with many things that are a constant assault, we often become numb to the realities we face. 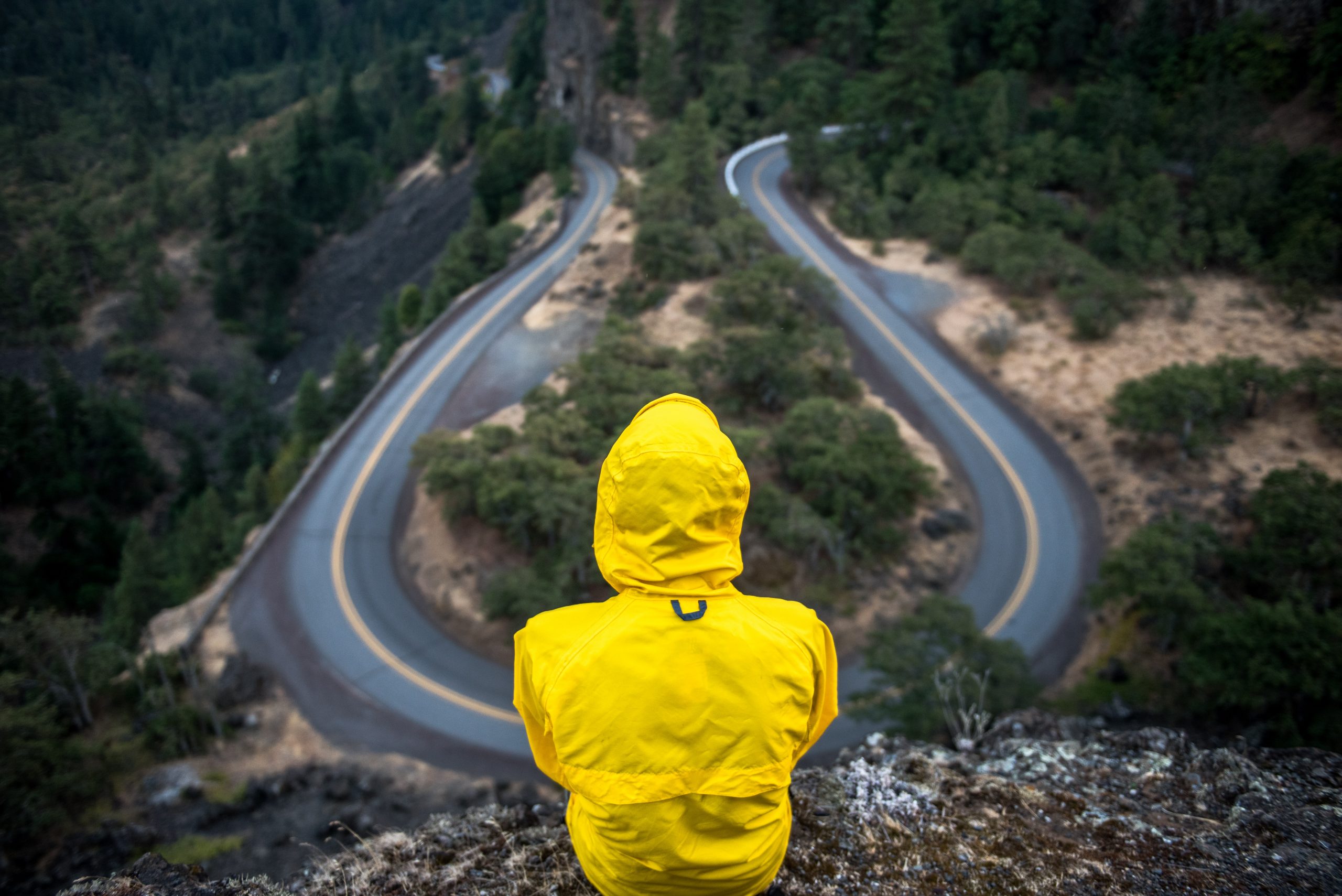 Five year anniversaries, as a marker of the passage of our lives, are moments to stop and reflect. This year, countries were to come to the UN Conference of the Parties meeting in Glasgow, Scotland, and bring their country plan – their Nationally Determined Contribution (NDC) –  that detailed their own climate resiliency, adaptation and mitigation plans. The UN is meeting today – virtually – to see what progress has been made and where we stand as a global community. We are a community made up of individual countries – some in our community are taking action and moving forward, others are not. As a world community, we are at best treading water, and at worst, heading backwards. Does this sound in some ways similar to the what we see, playing out, across the US as reactions and action by individual states to addressing the COVID19 crisis? Or for that matter how various countries around the world are or are not taking action to address our global health crisis? Even as we are on the cusp of the “silver bullet” with vaccines, so much suffering could be lessened, if we took simple, straightforward actions like wearing masks and social distancing. There will be no vaccine for the climate crisis, we can’t hope for one, plan for one, nor expect one. So we must prepare and get comfortable with the uncomfortable reality of the life long journey of constantly working to slow down our climate crisis, with the important recognition of its reality as an emergency, always at the forefront. 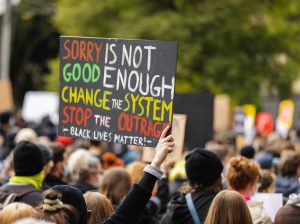 ClimateMama, as part of the global parent climate community,  serves as a witness of where we are at and where we must go. As parents, we take the moral high ground on behalf of our children, as we join in raising our voices around the world demanding our governments and all leaders, fight to #MakeParisReal and #FightFor1Point5. We are witnesses to our own inaction and the precarious future and now that our children are living in and will inherit. The climate crisis  is inextricably linked to racism, to our global health crisis and it acts insidiously as a threat multiplier, making everything we face worse.

As the final days of 2020 come to a close, we also stand witness to what will, I believe, be the beginning of a world transition – the inflection point and moment when we begin, in earnest to enact the “great turning, that will be built on active hope” which Joanna Macy has spoken about for years. This 5th Anniversary of the Paris Agreement will serve as the  “marker in time” of this moment of change – I firmly believe this, but only through the passage of time, will we know for sure. Because of so many factors, we can never go back to what was pre-COVID, nor should we want to, that path was only leading to a cliff. Instead, with our eyes wide open, we can leap forward to a new world. We must remind ourselves of the broad goals we set in 2015, at Paris, and 5 years from now, truly celebrate the incredible, difficult and necessary actions we will and are taking to make our climate crisis something we and our children can live through and with – a world where we can and will thrive, not just survive.

What can you do? Beyond being witnesses, join us in support of our children, by signing on to the Fridays For Future “Promise to Fight for 1 point 5”

Sharing love and ACTIVE hope on this the 5th Anniversary of the Paris Agreement.

Below, for reflection and as a reminder,  is the post I wrote, 5 years ago – as the Paris Agreement was reached.

After all the back slapping, high fiv’ing, check kisses and congratulatory popping of champagne corks, as 195 countries signed off on the Paris Climate Agreement on December 12, 2015, we must now face our sober reality in the light of day. The Paris climate conference, or COP21, didn’t “solve” global warming – we didn’t even come close – we didn’t come up with a concrete plan and our children’s world and future remains severely threatened. What world leaders did acknowledge, and what is a critically important starting point is: “The sh$%*t has hit the fan.”

What we did in Paris was pull the curtain aside just a little bit more. We all looked out of the same window and we collectively acknowledged seeing the same mega storm brewing. We know it’s at least a category 5 hurricane – and in our heart of hearts we know it is in fact much worse.

What we did in the lead up to Paris and at the conference itself, and what we must do in the conference’s aftermath, is clearly and forcefully continue to stand by the “gauntlet” we have laid at the feet of our world leaders, and we must stand fast – demanding sustained and real action. Paris was about coming face to face with the realities of climate change, acknowledging it is here, now and threatening our survival. The final agreement has been carefully worded and crafted, it lays out hopes for what we should do, it apologizes for what we haven’t done, but what it doesn’t do, is lay out a clear path on how we will get to where we need to go. Will we be able to protect ourselves and weather the storm? Not with this Paris agreement – but it is at least a floor to stand on, which is more than we had before.

Paris was a clear acknowledgment that there is a mega storm off our shores. But instead of racing forward immediately with short term plans to weather this impending mega storm, and with long term programs, policies and plans to deal with the recovery needed, the Paris agreement – after facing reality – gives us too much time to “catch our breath” as we “wait just a little longer” watching the winds howl and blow.

“Tell the truth, actions speak louder than words, and we aren’t afraid.” Our job, post Paris is to live by this mantra and to keep sustained pressure on all our leaders – politicians, business, religious and community leaders – who have taken the first steps by “telling the truth.” Actions must now be put into place – urgently and firmly. We know they are afraid; but we must demand they be fearless. Our children’s eyes – looking into ours, trusting us to protect them – won’t allow for inaction or fear.

Top 5 agreed to outcomes from Paris, what was decided:

1. We must hold temperatures “WELL BELOW 2 degrees C above pre-industrial levels, and to pursue efforts to limit the temperature increase to 1.5 degrees.” The world will likely reach 1 degree C above pre-industrial levels in 2016. Ice caps are already melting, sea levels are rising, and havoc is having a “hey day” messing with our planet and us, as extreme weather events “rue the day.”

2. Much of the world’s remaining reserves of fossil fuels must stay in the ground and can’t be burned. Those who see the “glass half full” see this as a clear signal to fossil fuel companies, investors and financiers, that the age of fossil fuels is over. Those who see the “glass half empty” see this as a warning, but with no clear plan how to move decisively to renewable energy in adequate time to stave off the worst climate impacts.

3. Countries will review their intended nationally determined contributions (their country climate plans) every 5 years, with new and stronger greenhouse gas reduction targets. Our job will be to hold government’s “feet to the fire” plans must be far reaching and much stronger then they are now.

4. Significant and consistent financing must be mobilized, from government and private sources, to help developing countries move to renewable energy now. This remains a critical yet a perennial problem. The financial requirements to implement climate plans and effective solutions in both developing countries and at home, are not being met. This also remains a clear justice issue that calls for moral and ethical acknowledgment and action.

5. “Loss and damage.” This phrase was used for the first time in the official UN text to acknowledge that many countries, particularly small island developing countries, are facing huge and devastating consequences from climate change now, even though they have done little to nothing to contribute to the causes of climate change. The expectation is that those responsible for these devastating damages (the big polluters – USA, China etc) should and must pay.

The critical take away from Paris is the collective acknowledgement that global warming is not only here and now, but that it threatens humanity’s very existence. All countries have acknowledged this, with at least “tacit agreement.” What is also critical, and what must not be left out, is that when we add up all the commitments from all current country climate plans, we don’t go far enough, nor fast enough to stave off the worst impacts of climate change.