I grew up in Canada’s “oil country” the Texas of the North, land where the dinosaurs roamed, of wheat and oil fields – of a seemingly endless supply of “fossil” fuels that are a gift and a curse from the dinosaurs and their habitat that encompassed Alberta 70 million years ago. Growing up in Alberta, Canada was easy, fun and came with a childlike naivety about the role the province played as oil “baron” not only for the rest of the country but also for our powerful neighbors to the south, the USA. In fact, growing up in Alberta we all had a smug sort of arrogance, that came from living in a province that had no sales tax, and was the province “giving” money to the rest of the country, not taking it, because of our ‘great wealth’ from oil. Tailings ponds, environmental degradation, carbon capture and storage…these were words that were foreign to me, that didn’t exist in our lexicon, and that weren’t yet on our radar, and were not “issues” or “concerns” to us, to the government, to the public or even to most scientists or environmentalists.

Alberta is a land frozen solid in the winter, but often brilliant under bright and endless blue skies. Summers are and were usually warm and the sun shines until late in the evening. The Prairies were bountiful, the Rockies a beautiful gift from nature and life in Alberta, in general, was good. Growing up, almost everyone I knew had some connection to the oil patch; your best friend’s mother, brother, sister or grandparent worked in, for with or around oil and it’s related products and services. You took this for granted and didn’t think about broader consequences, like climate change and water pollution, only that the oil fields helped provide a good life for those around you. This wish to see the Alberta oil patch through rose-colored glasses continues to this day.

The two big cities in Alberta, Calgary and Edmonton, each have their own unique connection to oil; Calgary was and still is the home to oil company corporate headquarters, and Edmonton is the seat of the provincial government and gateway to the wells themselves. There is a lot of oil in the province, the easily accessible wells near Edmonton where drilled first, and the oil in the sand, up north, was a project for the future, when the price of oil would some day increase and make it feasible to extract this “mythical oil” from the sand. When I was growing up, this seemed a distant dream of the future…a future that is now. 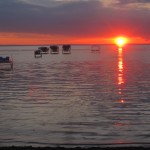 I sit writing this, out at a cabin on a lake in central Alberta, where I spent many summers when I was growing up, gazing at the water I grew up swimming in, hoping my children will have the same opportunity I did to build memories in this beautiful province and share them with their children. I wonder if this lake will be here for them in their future, when they are my age. I also wonder what if any role the “oil industry” will play then in this province, or if that role will have been played out as the oil is used up, and only the damage from it will remain. A persistent drought in Alberta and a changing climate are resulting in the lowest water levels seen on this lake in a lifetime. With low water come weeds, algae and health issues, attributed as well to pollution entering the lake from homeowners and farmers fields. Local climate change and environmental problems are dwarfed by bigger international problems being created in part by the greenhouse gas intensive extraction methods of the oil sands, whose development is multiplying exponentially as Canada’s neighbors to the south search for ways to lessen their reliance on foreign (middle eastern oil) as well as from the difficulties both politically and practically of accessing off shore oil fields. Not only are Canadians hiding behind the remoteness of the oil sands areas, but so to are most Americans who are happy to welcome fossil fuels from a “safe” neighbor and secure source.

We all know that as we get older, life gets more complicated and is not as simple as we thought it was when we were children. But that old saying “out of sight and out of mind” seem to play big here in Alberta. The oil sands development projects are growing and thriving in Northern Alberta..several hours by plane from Edmonton, already the most northernly big city in Canada. So far away, surrounded by only small communities, mostly native or if not, then populated with workers from the oil fields; up north and staying there only long enough to “get rich” not long enough to worry about the communities around the oil fields and the environmental and social costs of the oil extraction business. 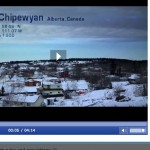 Take a few minutes with the children in your life and watch and listen to Keepers of the Water, hear the voices of some of the children directly affected by developments in the oil patch in Northern Alberta. Stay tune next week for some more musings from western Canada and some more information on the oil fields in this part of the world!