The divestment movement began on college campuses several years ago and has quickly spread to houses of worship, individual investment portfolios, state, public pension funds and private company investments. 350.org has been a leading force in driving this movement and defines “Divestment” as the opposite of investment – in the simplest terms getting rid of stocks, bonds, or investment funds that are unethical or morally ambiguous. Specific to fossil fuels, while each campaign is independently run and may bring different emphases and asks depending on their local context, the majority of campaigns are asking institutions to:

• Immediately freeze any new investment in fossil fuel companies;
• Divest from direct ownership and any commingled funds that include fossil fuel public equities and corporate bonds within 5 years.

According to 350.org, 515 institutions have made commitments to divest over US $3.4 TRILLION!

The divestment movement has risen up at the same time as social impact investing has begun to surge forward. As Climate Mamas and Papas, how we manage our personal finances and investments from a holistic perspective that takes into account our moral, social and ethical perspectives should be critical and obvious. Our personal investments should reflect how we manage other parts of our lives, who we are, and what we talk about to our kids, family, friends and financial managers too. Unfortunately, as we well know, it’s not that simple, straightforward, or obvious.

With 175 countries signing on to the Paris Climate Agreement on April 22nd, 2016, the signals to keep fossil fuels in the ground and move quickly to renewable energy are strong. Fossil fuel companies and fossil fuel infrastructure companies, seem more and more to be “stranded assets” and bad investment choices. 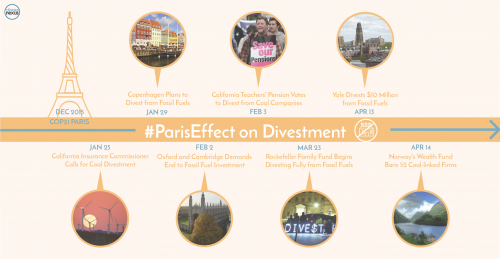 Timing is “everything” as they say, and the investment signals moving forward seem to be leading to demands for fossil free investment opportunities as the way forward for individuals and institutions. Leading into Earth Week, students at Columbia University in New York City are staging a sit in to demand that Columbia divests from fossil fuels. The New York State senate recently sent a bill to it’s finance committee for consideration calling for NY state to divest it’s pension funds from fossil fuels, and the Rockefeller Family fund announced in early 2016 that they were divesting from ALL fossil fuels. Grassroots movements are effectively stopping fossil fuel projects from moving forward in states across the country and Attorney Generals in more then 19 states have joined forces to put EXXON and other fossil fuel companies on trial for their “crimes against humanity. ” The reality that climate change is impacting our planet faster then anyone ever imagined becomes clearer every day.

In trying to get a better handle on what options are out there from a personal financial perspective, I recently had the pleasure of interviewing Ian Monroe, Co-Founder, President and Chief Sustainability Officer of Etho Capital, as well as the Founder of Oroeco and a Lecturer on climate change and life cycle assessment science at Stanford University. Ian and I share many of the same concerns and hopes for our future, and I was thrilled to learn about many of the practical programs that Ian is working on to make our planet a better place! Etho Capital, which Ian has founded, is a socially responsible investment management company, committed to helping solve climate change by bringing sustainable investing mainstream; an important and up and coming concept that clearly we are all thinking more about.

Ian shared some background and insight on a new product his company has launched – the ETHO ETF, which according to Ian is the world’s first truly fossil free ETF (exchange traded fund). As background, an ETF is a security that tracks an index, a commodity or a basket of assets like an index fund, but trades like a stock on an exchange. ETHO began trading on the New York Stock Exchange in November 2015. ETHO is not only free of fossil fuel companies but it’s also comprised of 400 of the MOST climate efficient US companies.

So it seems the time is now for investment opportunities that really capitalizes on the concept of impact investing and move us quickly to take fossil fuels, which increasingly are becoming stranded assets, out of the mix. Ian has said that the idea behind the ETHO ETF is to empower everyone to invest in climate sustainability and social responsibility while at the same time gaining competitive financial returns. The idea as well is to make this fund accessible to the full spectrum of investors, ranging from large institutions to college students investing for the first time.

Below are some of the highlights from our interview with Ian:

“Background: I grew up on a small organic farm where I saw first hand the power of drought and wildfire and how these natural phenomenon are getting worse and worse because of climate change. I know families who have lost homes to wildfires and I began thinking about the linkages between drought, fire, food production, as well as the places and the dozen of countries where my work has taken me and where I now have many good friends. I began to see clearly how climate change is really the world’s biggest social justice issue and racial justice issue exacerbated by the our use of unsustainable energy and agricultural practices.

My work at Stanford is about scaling up climate solutions and it led me to focus on how to do the accounting for environmental impacts, including better lifecycle assessments. I came to appreciate the big gaps that are still there. It’s great to have more science to back up what we already know, great to see how people are becoming more engaged in the climate movement, and great to see the recognition regarding the feasibility that exists to scaling up solutions. But, and this is a big but, there is an important missing piece on how to pay for what is needed and to move us away from the enormous and unsustainable energy and agricultural companies out there and towards the growth of companies that can help move us towards climate solutions.

Etho Capital came out of work I did on ORECO, a company which engages the public around taking action on climate change. ..Two years ago we began gathering climate impact data and looking at total solution dollar investments, looking at carbon efficiency in each industry, and choosing the most efficient companies, and that’s how we established the Etho Climate Leadership Index (ECLI), a true fully fossil free, index. Including oil and gas. From our research the science is clear. While natural gas may have short-term electricity benefits, in the long term methane in general, in agriculture and as a fuel source is a bad investment. Our overall philosophy and mission is to produce investment funds that are the most sustainable possible and which out-perform most indexes in the markets. We want to create products that empower people.

We also see financial advisors as a key bottleneck, so they are important folks to talk to and to help them understand why fossil free investing is so important. This is the biggest area of where change needs to happen. We are trying to do as much as we can and we hope that through the media and environmental blogs, and conversations between individuals and their investment advisors, these changes will begin to happen more quickly.” 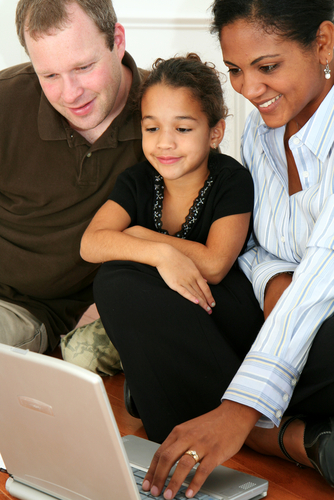 At Climate Mama, we see the momentum building and the time for fossil free investing is clearly here. Here is one more recent example to bring to your attention. On April 11th, a NY State Senate Committee took an important step towards long term protection of state pension funds. “The Fossil Fuel Divestment Act (S.5873/A.8011-A) would require the New York State Comptroller to divest the New York State Common Retirement Fund from all holdings in the 200 largest publicly traded fossil fuel companies, as defined by carbon content in the companies’ proven oil, gas, and coal reserves. Divestment from coal companies would be completed within one year; divestment from all other fossil fuel companies would be completed by January 1, 2020.” Getting the bill to the Senate Finance Committee, where it is now, is the beginning of a long road but one that’s critically important if we want to protect our retirement interests from stranded fossil fuel assets.

From where we sit, it would appear that Ian and Etho Capital is on to something really, really important. They are helping to put into our hands more options and critical ways that we can all be part of the solution.

Leave a Reply to Gina B Cancel reply