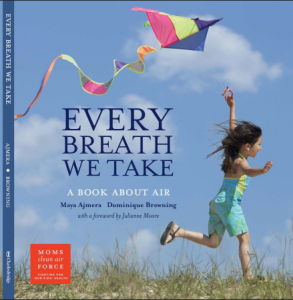 At Climate Mama, we love to share the thoughts and ideas of powerful Climate Mamas and Papas. One of these special people who we have come to know and admire is Dominque Browning, co-founder of Moms Clean Air Force.

We sat down to talk to Dominique recently and we wanted to share her thoughts and ideas with you too. We first interviewed Dominique in 2012, and you can find that interview here. Interestingly enough and perhaps not surprising, Dominique’s answers haven’t changed very much and her resolve seems to be only that much stronger.

“Wow. I reread that 2012 interview after I wrote my answers. It is somewhat amazing to me that I’m saying basically the same things. I still have hope. But I also now have more conviction, that we will work this out. But that’s a choice I make. The alternative is beyond the pale—that way lies madness.

Also, and fyi, just in time for Earth Day, Dominique has a new children’s book out, Every Breath We Take.

1. What inspires you to keep going, to keep fighting this challenging battle against climate change?

I’m inspired by the slow, but steady, progress we are making so far. The US is in a far stronger position with regards to climate goals and policy than it was six years ago. And I’m also inspired by the amazing women I am meeting in this work. Women whose passion and intelligence and strength simply cannot be beat.

2. What are the three greatest challenges and/or opportunities you feel the world faces with climate change?

Speed, ambition, and follow-through: Cutting greenhouse gas emissions significantly enough, quickly enough, to miss triggering irreversible and severe consequences—and, once declarations are made as to intention, following through on actually getting this done!

3. Do you see any hopeful signs that people are waking up to the dangers of climate change?

Yes. Significantly more people understand that we have a problem, and would like to see something done about it. Young people are much more awake to the issue. And moderate Republicans—though without a platform, yet—are finally beginning to talk about ways to confront the problem.

4. Other thoughts or ideas that you would like to pass on to our community?

We have to exercise our powers, as citizens of this country. It sounds terribly quaint, but those old-fashioned habits of citizenship are hugely important. They include protesting against the corporate polluters, of course. But they also include activities such as writing to politicians, meeting with representatives, and staying educated about the issue.

I’ve just finished reading Jane Mayer’s Dark Money. I wish it were required reading in our community—it ought to be. I will never see the world the same way—not because of one stunning revelation, but because of the systematic way in which Koch and his fellow oligarchs, from both the right and the left, I might add, dismantled our belief in a democracy, and disrupted it. Citizens United was only the culmination of a decades-long, detailed map to power.

All this, in order to protect vast fortunes from taxation, and from regulations that would protect public health. These people call themselves libertarians, but that’s a joke: they love regulations, tax breaks, subsides, and take extensive advantage of them, if they get rich from them. Mayer exposes it to light. 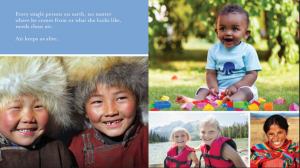 5. Why did you write this book? [Every Breath We Take]

There wasn’t anything on the market that explained something so fundamental: air. And, you don’t grow up wanting to protect what you don’t know you have. I really wanted to create a way for parents to talk to youngsters about air, about how it can get dirty, about how that is not supposed to happen, and about how important it is to keep it clean, and treasure clean air.

6. Since we spoke to you in 2012, do you have any significant changes to any of the answers you gave us then? And, what have you noticed as the biggest change in the United States, in addressing climate change?

Wow. I reread that 2012 interview after I wrote the answers above. It is somewhat amazing to me that I’m saying basically the same things. I still have hope. But I also now have more conviction, that we will work this out. But that’s a choice I make. The alternative is beyond the pale—that way lies madness.

As for Moms Clean Air Force, I feel we have really had an impact on the national conversation. Finally, our focus has moved from polar bears to people. Finally, we have a White House talking about climate change and children’s health. Finally, we are hearing a sense of urgency from our leaders. We have worked with terrific partners, and I do believe that all of us, demanding attention, and demanding change, are moving the needle.