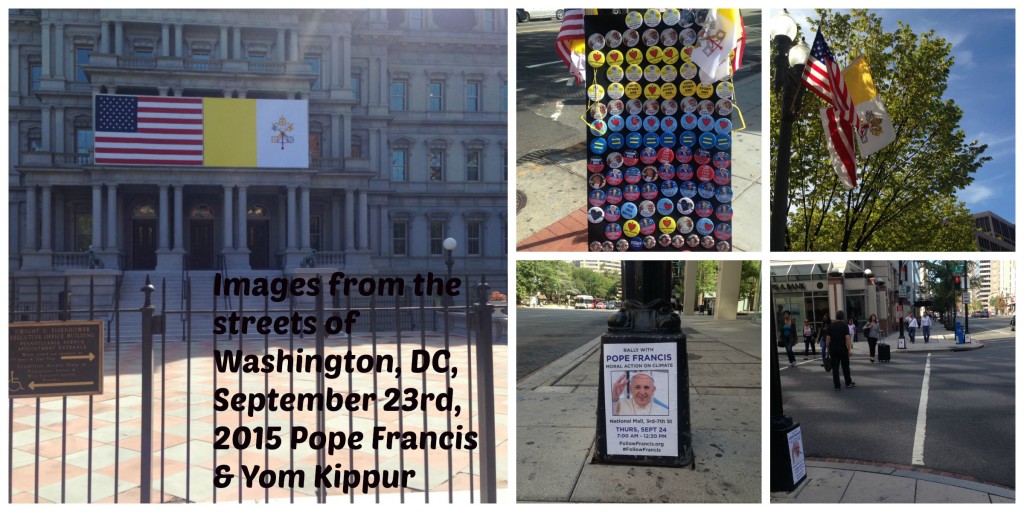 Washington DC, September 23, 2015 I didn’t think I would be so moved….While I have been helping prepare for the Moral Action on Climate for months now, so far what I have been feeling is excitement and anticipation. Hope as well, which was buoyed by the Pope’s first address in Washington when he said to President Obama that it was: “encouraging that you are proposing an initiative for reducing air pollution. Accepting the urgency, it seems clear to me also that climate change is a problem that can no longer be left to a future generation….When it comes to the care of our ‘common home’ we are living at a critical moment of history.” I can only imagine what he will say to the joint session of Congress on September 24th…But more on that tomorrow.

I want to share a “taste of Washington” with you via some photos from my day so far. And also to share a few reflections from my first Yom Kippur services outdoors. This was not just any “outdoors” mind you, but at the foot of the Lincoln Memorial looking at the Reflecting Pond and the Washington Monument. I am away from my family and didn’t think it would be an emotional experience; again, what I felt as I walked toward the crowd, which was dressed mostly in versions of white, was excitement. But as I watched the ducks play beside the front of the service, and white birds flying overhead in the most beautiful blue sky; I started to feel something special and magical. As we went through the service, which was unique in it’s own right with reflections on the homeless and affordable housing, the war in Syria, climate disruption, income inequality and endangered species, I knew this would be a moment I would always remember.

While not surround by old friends and family, I felt surprisingly comfortable. I was with a new family of sorts. One that thought like me; deeply concerned about the plight of our planet, and the future of our human species. When one of the Rabbi’s invited those who felt so moved, to come up for an Aliya (the honor of being called to the reading table in a synagogue or in this case, to the front of the crowd), she seemed to be looking directly at me.

When she said it was for those that were hurting, those who had a loved one who were sick; I joined about 40 others who made their way forward. I lost my father to his battle with cancer less then two weeks ago. While I am glad for him that he is finally no longer suffering, my family will forever hurt in his absence. As we stood by the Rabbi, we could hear the mass from The Pope’s midday prayers With US Bishops at St. Matthew’s Cathedral, blasted on loud speakers along the mall. These prayers in latin blended so beautifully with the hebrew prayers enveloping me. 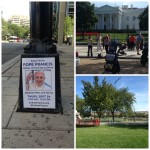 I will share more in our post tomorrow, and leave you now with a few more pictures and only a few parting words. I also got to sit with two wonderful people, Steve and Kendall from North Carolina. They are leaders of the Beyond Extreme Energy movement which is shining a light on the the Federal Regulatory Energy Commission, and it’s role in accelerating the climate crisis. Steve is on his 16th day of a water only fast, Kendall, just 3 days she told me….”just 3 day,” this was amazing to me and so moving. They were both articulate, thoughtful and so very kind. Often with just the fasting of one day for Yom Kippur, I am not sure I am as articulate, thoughtful or so kind…

Yours in thought and prayer, for all of us and for our Mother Earth…

P.S. In case you can’t decide if you should join us or not tomorrow, take a look at this “hot of the presses” line up for the Moral Action on Climate, beginning at 7:30am ET on the National Mall, between 3rd and 7th Streets.