We Are Seneca Lake: New York Mothers and Grandmothers United for Our Children 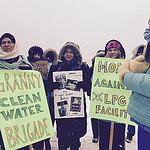 Photo Credit: We are Seneca Lake

On Friday, January 16th, New York mothers and grandmothers braved the winter wind and cold to sing songs, hold up banners and risk arrest, as they joined the citizen’s blockade at Seneca Lake, New York to protect their children’s right to clean air, clean water and a livable, sustainable future and now.

These parents join a long and growing list of musicians, farmers, teachers, local business owners, school children and a wide range of community groups who are part of a sustained public non-violent direct action campaign opposing Texas-based Crestwood-Midstream’s proposal to use old abandoned salt caverns along Seneca Lake to store millions of barrels of liquid petroleum gas (LPG) and billions of cubic feet of natural gas. The proposal has generated opposition from over 200 businesses, more than 60 wineries, 11 municipalities and thousands and thousands of residents in the Finger Lakes region and beyond, who are concerned about the threat it poses to public health and safety, one of the state’s largest supplies of drinking water, the local economy, and the area’s growing wine and tourism industry.

Yet, the protests continue, DAILY. Grab the kids in your life and watch this short video of mothers and grandmothers, standing outside on a frigid January day as they show their solidarity and make their voices heard. We at ClimateMama are inspired and in awe of the sustained community presence to protect their community and in fact, all of ours.

As caring Climate Mamas and Papas, we can help them spread their message loudly and far beyond New York. The We Are Seneca Lake campaign is the Selma of our time. We are watching as similar protests and public outcries are growing around our country and around the world. There can be no “sacrifice zones.” Every day new studies are published, more children are getting sick, and more reasons become evident why we must not only draw a line in the sand, but put ourselves on the line to stop new fossil fuel infrastructure projects. 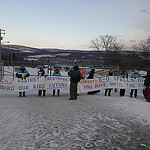 Photo Credit: We Are Seneca Lake

We need to jump into the future now. A future where our energy comes from clean, renewable resources. We know this must happen yet too many people continue to hide from the facts.

The people of We Are Seneca Lake are not hiding and we need to help the world see them.