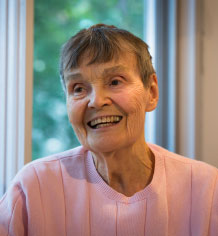 Theo Colborn “connected the dots.” She dedicated the last 30 years of her life to “compiling and disseminating the scientific evidence on the health and environmental problems caused by low level exposures to chemicals that interfere with development and function called, endocrine disruptors.’

She made the case that not only by keeping our “eyes wide shut” are we pushing our planet towards climate chaos, but through our reliance and expansion of fossil fuel production, we are creating multiple global health pandemics, and poisoning our children’s bodies forever.

In her last essay dated November 14, 2014, THE OVERLOOKED CONNECTION BETWEEN HUMAN HEALTH AND FOSSIL GASES, Dr. Colborn states: “Over the last 50 years as exposure to chemicals derived from fossil gases has increased so have the number of global pandemics attacking the human endocrine system.”

“In the US alone, almost half the individuals born today will become diabetic and/or obese; one of every 88 babies born has autism spectrum disorder. For boys it’s one in 54. The cost of treatment and care for these problems along with infertility, Parkinson’s and Alzheimer’s Disorders, and hormone driven cancers are in the trillions but are in-estimable because they are increasing so rapidly. All of these disorders have been traced back to prenatal, early life, and/or adult exposure to chemicals derived from these oil and gas condensates that interfere with the normal function of the endocrine system that assures species integrity and perpetuity. Before the 1930s these ailments were rare.”

Take some time today, and learn more about Theo Colborn, mother, scientist, warrior, champion and hero. It’s Do Something Wednesday at ClimateMama, so why don’t you share Theo’s story and good work with someone you know today and talk to the kids in your life about what she was doing on their behalf.

Knowledge is power, and we need all the power we can get to fight AGAINST fossil fuels and FOR a renewable, sustainable future for our children and ourselves.