CO2, Worse than Poop: The Movie! 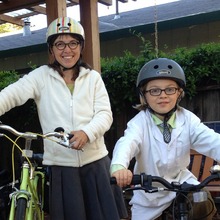 Celebrating and sharing stories about parents doing extraordinary things because they want to create a better, cleaner and more sustainable future for their children and ours, is something we love to do! So, grab the kids in your life and take a moment to meet a wonderful California Climate Mama Vanessa Warheit, and her 8 year old son Elliot. Vanessa is empowering Elliot and providing him with the tools he needs to make his voice heard, so that he can have a role in changing our world for the better.

As some of you know we are pretty partial to “Elliots” here at ClimateMama, but regardless…we want to share Vanessa and Elliot’s current adventure, Worse than Poop! with you. We think this film project is a brilliant idea and a great way to educate people about climate change, electric vehicles and transportation issues. The film helps give us hope and inspiration that a positive and livable future is indeed possible.

Please Join us and support Elliot and Vanessa’s Kickstarter campaign, which is raising funds to create the movie “Worse then Poop.”

According to Vanessa: “By making kids laugh, we can introduce them to the need for a solution. And by making parents laugh, we will engage entire families in this issue. My husband also encouraged me to do this – and most importantly, our son Elliot wanted to participate. So Worse Than Poop! went from being an Idea to being a Project. And with your help, it will soon become a movie.”

Vanessa made us smile when she said: “It’s going to make a difference – because reaching kids means reaching their parents. And what kid doesn’t love talking about poop?” 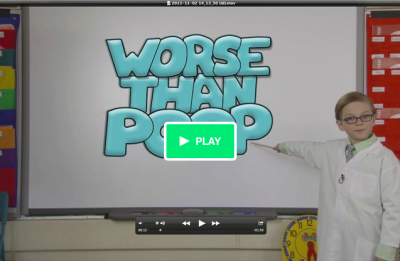 This excerpt is from Vanessa and Elliot’s website, Worse than Poop, and it gives us some more background and context for their project:

But what if you could see it? What if the 19 pounds of crap coming out of your car’s tailpipe was… crap?
“Professor” Elliot, a bespectacled 8-year old wearing a necktie and lab coat, takes us on a short journey to a world of pooping cars, pooping trucks, and pooping planes – and then on to a cleaner poop-free future. Using a combination of live action video and animation, “Worse than Poop” will illustrate basic scientific facts about carbon dioxide pollution in a way that kids can understand, and are likely to remember.
Featuring mom’s minivan (one pound of poop per mile!), the lumbering Suburban (10 miles, and 19 pounds of poop!), the electric Tesla S (faster than a speeding Captain Underpants!), the Nissan Leaf, the Mitsubishi i, buses, trains, and a flotilla of electric and people-powered bicycles and scooters, “Worse than Poop” will engage children ages 5-12 in the most important issue of our time: climate change.

As a bilingual Spanish-English kid, Elliot plans to deliver his message in both English and Spanish. The Spanish version, ¡Peor Que Caca!, will reach a vast Spanish-speaking audience that is currently underserved by the climate movement.”

And the icing on the cake for us, is that Elliot and Vanessa are teaming up with our friends at the Green Ninja. Wow!

Go Elliot (and Vanessa too) !!