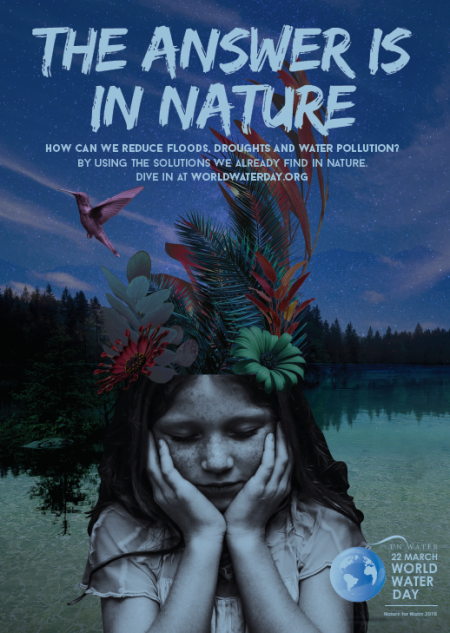 March 22, is World Water Day, a day established by the United Nations to look at water issues around the world. Each year the UN establishes a theme to discuss, learn and share information on the critical yet so often overlooked scarce resource of water.

This year’s theme – Nature for Water – explores how we can use nature to overcome the water challenges of the 21st century.

According to the United Nations: “Environmental damage, together with climate change, is driving the water-related crises we see around the world. Floods, drought and water pollution are all made worse by degraded vegetation, soil, rivers and lakes.

When we neglect our ecosystems, we make it harder to provide everyone with the water we need to survive and thrive.

Nature-based solutions  (NBS) have the potential to solve many of our water challenges. We need to do so much more with ‘green’ infrastructure and harmonize it with ‘grey’ infrastructure wherever possible. Planting new forests, reconnecting rivers to floodplains, and restoring wetlands will rebalance the water cycle and improve human health and livelihoods.”  The 2018 UNESCO UN World Water Development Report, NBS for Water details how to use or mimic natural processes to enhance water availability (e.g., soil moisture retention, groundwater recharge), improve water quality (e.g., natural and constructed wetlands, riparian buffer strips), and reduce risks associated with water-related disasters and climate change (e.g., floodplain restoration, green roofs).

World Water Day is a day to draw attention to the facts that:

•   2.1  billion people in the world today do not have access to safe drinking water — roughly 1 in 4 people, compare this to 1 in 10 people in 2014. Things are changing, but not in a positive direction

•  Agriculture currently accounts for 70% of global water withdrawals, mostly for irrigation  a figure which rises in areas of high water stress and population density. Industry takes 20% of the total, dominated by energy and manufacturing. The remaining 10% goes to domestic use – the proportion used for drinking water is much less than 1%.

•  Today, around 1.9 billion people live in potentially severely water-scarce areas. By 2050, this could increase to around 3 billion people.

• An estimated 1.8 billion people use an unimproved source of drinking water with no protection against contamination from human feces.

• Globally, over 80% of the wastewater generated by society flows back into the environment without being treated or reused.

• The number of people at risk from floods is expected to rise from 1.2 billion today to around 1.6 billion in 2050 – nearly 20% of the world’s population.

• Today, around 1.8 billion people are affected by land degradation and desertification. At least 65% of forested land is in a degraded state.

Fresh water accounts for less then 3% of all the water on the globe and access to clean, uncontaminated drinking water is unavailable to almost 1/6th of the world’s population. Millions of women are unable to work and millions of children are unable to go to school, because they spend so much time collecting water.

Climate change impacts including changing levels of rainfall, decreasing runoff from glaciers, drought and smaller levels of snow pack are all contributing to making fresh water less available and more of a scarce commodity. In fact, several large cities around the world are already experiencing days when water taps to hundreds of thousands of homes are regularly, ‘turned off.’ Capetown, South Africa is skirting around “Day Zero” which may or may not become a reality in 2018; a day when the taps to a million people will no longer turn on.

Most developing countries have very low per capita carbon footprints yet they feel the effects of global warming and it’s impacts on clean drinking water most significantly. Global warming has no boundaries. The US produces close to 20% of the world’s greenhouse gas emissions which don’t stay “over the USA” but contribute to climate change the world over. So while the impacts of water scarcity may be more visible in other parts of the world, this is OUR problem and we need to be part of the solution.

Water is just the beginning of the road out of poverty.  Hours spent carrying water can instead be spent with family, tending crops, raising livestock or starting a business. Simple changes to sanitation and hygiene practices save thousands of babies’ lives and keep children in school.

Talk to your kids about how YOU and your family can help. Things that may be easy for us in most places in North America (turning on the tap and getting fresh, clean water for example) can be so very difficult for families in other places around the world. Remind your kids about how fortunate they are and what things they wouldn’t be able to do (play lacrosse, soccer, dance, draw, play video games!) if they had to spend hours each day collecting water for their family. 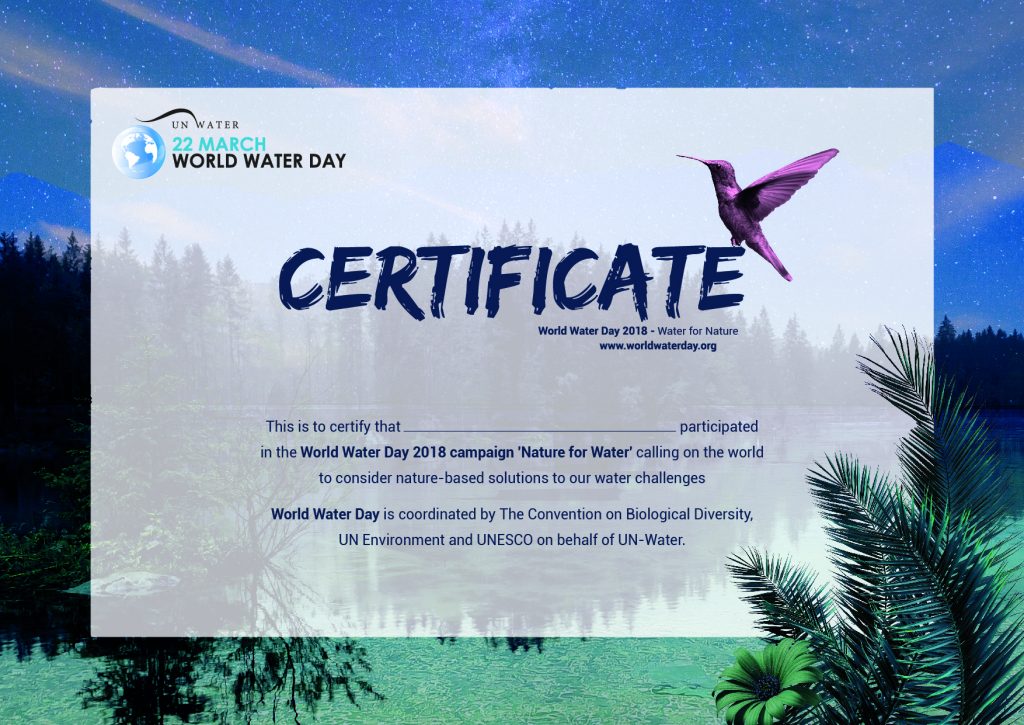 Talk about World Water Day with the kids in your life; print of this certificate, and fill it in together. Make water conservation and education a priority wherever you are.

As we live climate change access to clean, potable water will become the greatest challenge confronting the human race. World Water Day helps us put the focus squarely on this scarce and critical resource.