Al Gore’s An Inconvenient Truth was released in the spring of 2006 and many of our lives were forever changed because of it. Eleven years later, An Inconvenient Sequel takes the stage in bookstores on July 25, in theaters with a limited release beginning July 27, and nationwide on August 4th. See the movie, read the book; they will inspire you and remind you that each of us can and must find our voices and speak “Truth to Power” – our children’s future and now depends on it.

Mr. Gore begins by telling us that: “At this point in the fight to solve the climate crisis, there are only three questions remaining: Must we change? Can we change? Will we change.” From where we sit, the only answers to all three must be YES. Yet, Mr. Gore reminds us that while the answers to the first two of these three questions is a resounding yes, the conclusion to the last question – will we change – remains a prediction.

In order for this final question to be answered with a resounding yes, we need to face the existential threats to our survival head on. We all need to act now – each of us in our own way. There is no one simple way forward and as we see it, this therefore is our greatest hope. Climate change is complicated, complex and deeply rooted. The answers and solutions will and must take a myriad of forms. As a result, there is and will be room for each of us to find a way to become involved in the Sustainability Revolution that Mr. Gore talks about in his new book. Mr. Gore helps us see this, and guides us on our journey forward.

As many of our Climate Mamas and Papas know, Mr. Gore and the Climate Reality Project are the reasons that ClimateMama exists. The Climate Reality training and the leaders I have met because of it are who and what have inspired and empowered me to create ClimateMama, to find and use my voice to speak out, and to take action on climate change. 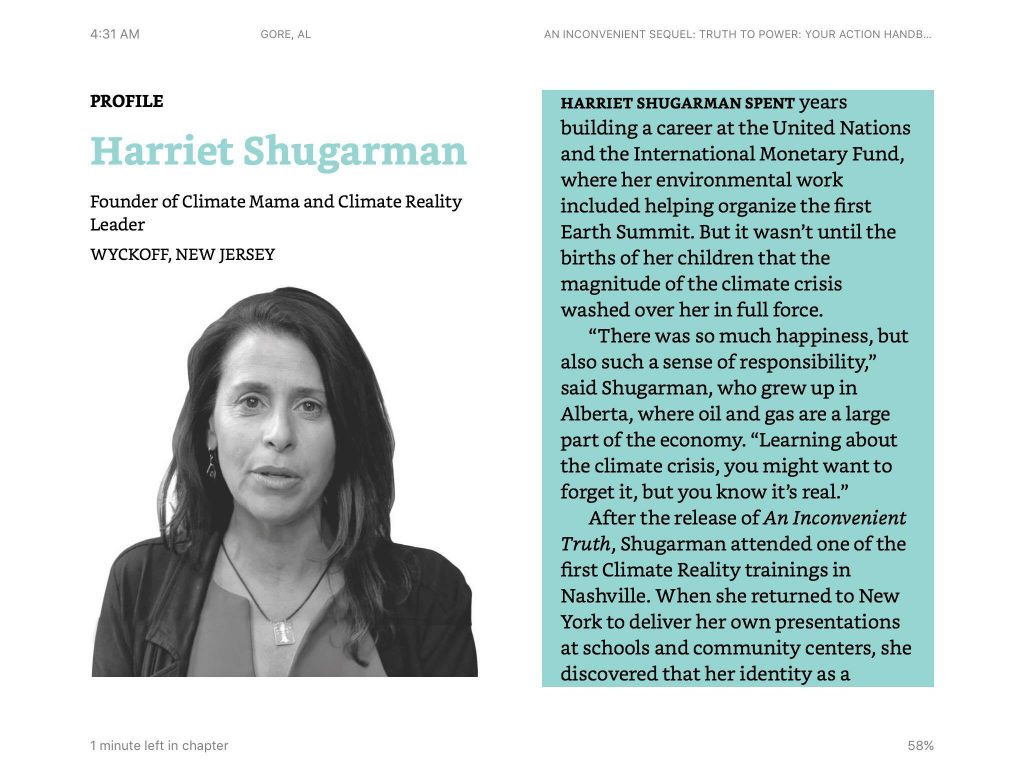 I am so very honored to be included in Mr. Gore’s new book (see page 223 in the section on talking to children about climate change). Mr. Gore’s book and film are filled with hope. They are filled with reasons, people and actions that demonstrate that each of us has a role to play in the sustainability revolution that is taking hold the world over – in spite of the road blocks that “power’ is putting in our way.

The book ends with a different question then those found in the beginning, a final question to those who did help the world change. “How did you find the moral courage to change, boldly and quickly and save our future?” Mr. Gore reminds us: “The time for us to answer that question is now—by seeking the truth about the reality we are confronting, by using the power we all have to bring about the necessary and urgent changes, and by never forgetting that the will to change is itself a renewable resource.”

Mr. Gore has dedicated his new book to his children and his grandchildren. Each one of them knows that every day their father and grandfather is doing everything he can to make their future and now not only hopeful but possible. We know that each and every one of our Climate Mamas and Papas is doing the same thing, each of us in our own way.

For those of you with kids on Snapchat, we want to be the first to share this exciting promotion with you, so you can share it with your kids.  Paramount Pictures and Participant Media have partnered with Snap Inc. for a first-to-market Snapchat promotion to give moviegoers under 18 a chance to see “An Inconvenient Sequel: Truth To Power” in theaters for free as soon as it opens. Snapchat users 18 and under will see the promotion populate in their Snapchat feed and be able to swipe up to redeem a code for free movie tickets, good through August 3, 2017. Each code is can be redeemed for two tickets. Ask your kids if they got the code!

With thanks and renewed hope,

P.S. Be inspired! Watch and listen to the original song created by One Republic for the film…share it with the kids in your life…

Truth To Power (Lyric Video) by OneRepublic on VEVO.

PPS. Jump in with both feet and get started today! Download Mr. Gore’s “Truth in 10” slide show and share it with your family and friends. Sign up to be one of the first to learn more about the next three day Climate Reality training…fall of 2017…Join our Climate Reality Family!