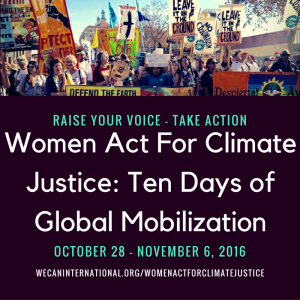 ClimateMama is honored to partner with the Women’s Earth And Climate Action Network (WECAN) in the lead up to the next round of global climate talks – COP22 – which will be held in Marrakech, Morocco beginning November 7, 2016. Join us for this exciting opportunity to show the world we are watching what our governments are doing and saying and we are not waiting – we are taking action now. There is room and space for everyone; you can join in as an individual, as part of a group, or as part of an organization or team – no action is too small, nor too large! Find out more below.

According to WECAN, ‘Women Act for Climate Justice — Ten Days of Global Mobilization’ is an opportunity for women and girls from around the world to organize together and show resistance to environmental and social degradation. Examples include: speaking about and taking action to highlight the climate impacts our communities are facing; showcasing resistance struggles which are ongoing or new; and demonstrating the many effective, just and safe climate solutions, strategies and political calls that are being implemented everyday by women and girls around the world. 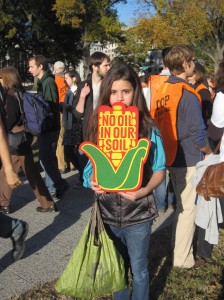 Your action can be as simple as taking a photo of yourself and your family holding up a sign, messages could include: “Keep Fossil Fuels in the Ground”, ‘Keep the oil in the soil’, ‘No Gender Justice without Climate and Ecological Justice’,”No Climate Justice, Without Gender Justice”, “Water is Life”, ‘No Healthy Oceans, no Life”;“Climate Justice Now”, “Women for 100% Renewable Energy”,”#WomenClimateJustice and on, and on…

Another option could be organizing a town-hall meeting, holding vigils and demonstrations, rallies, sit-ins, marches, educational events, art projects, and other actions and statements to showcase local struggles and solutions being offered by women leaders and their communities. For more ideas and actions check out the WECAN website.

The 2016 ‘Women Act for Climate Justice’ campaign is being called in advance of the November 2016 United Nations Framework Convention on Climate Change (UNFCCC) – Conference of the Parties, (COP22), which will be held in Marrakech, Morocco. As the number indicates, this is the 22nd annual COP.

COP21, which was held in Paris last year received a lot of publicity. This was the first time that the world came together to recognize the urgency and the reality of the crisis we collectively face. But, Paris didn’t “solve” the climate crisis, what it did was identify plans countries have to address climate change. These plans were presented without timelines for implementation, and with no binding requirements for putting them into action. Paris was a clear acknowledgment that there is a “mega storm” brewing off our shores. But instead of racing forward immediately with short term plans to weather this impending storm, followed by long term programs and policies to deal with the huge recovery needed, the Paris agreement – after facing reality – gives us too much time to “catch our breath” as we “wait just a little longer” watching the winds howl and blow.

Our job, post Paris is to keep sustained pressure on all our leaders – politicians, business, religious and community leaders – who have taken the first steps by “telling the truth.” Actions must now be put into place – urgently and firmly. We know they are afraid; but we must demand they be fearless. Our children’s eyes – looking into ours, trusting us to protect them – won’t allow for inaction or fear. WECAN reminds us that Marrakech is where civil society must demand that all government road maps going forward originates in a climate justice framework and with respect to human rights, women’s rights and Indigenous rights, and gender, social, economic and ecological justice. 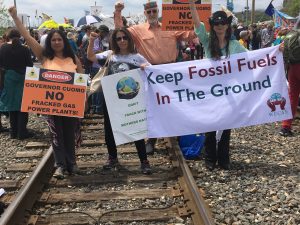 According to Osprey Orielle Lake, Founder and Executive Director of WECAN, Women Act for Climate Justice – 10 Days of Global Mobilization: “will provide a powerful tool for highlighting many of the just and safe climate strategies and solutions of women and girls from around the world, putting forward legal and policy demands as governments meet to act upon last year’s Paris Agreement.” That said, Osprey also reminded us that the Women Act for Climate Justice decentralized mobilization is intended to showcase our collective actions and voices far beyond the United Nations meeting halls as well.

So, join us and share your photo and statement and/or hold a local action sometime between October 28 to November 6, 2016. Find out more about how you can get involved here. You can submit your action here. Use the hashtag #WomenAct4ClimateJustice to help us spread the news!

P.S. Climate Papas are absolutely invited, encouraged and welcomed to participate in any of these actions!